External links about what others think about the original model M keyboards built by IBM.

Why I, even after finally owning a Beamspring, still went back to a Model M by u/Bitteneite (reddit.com) 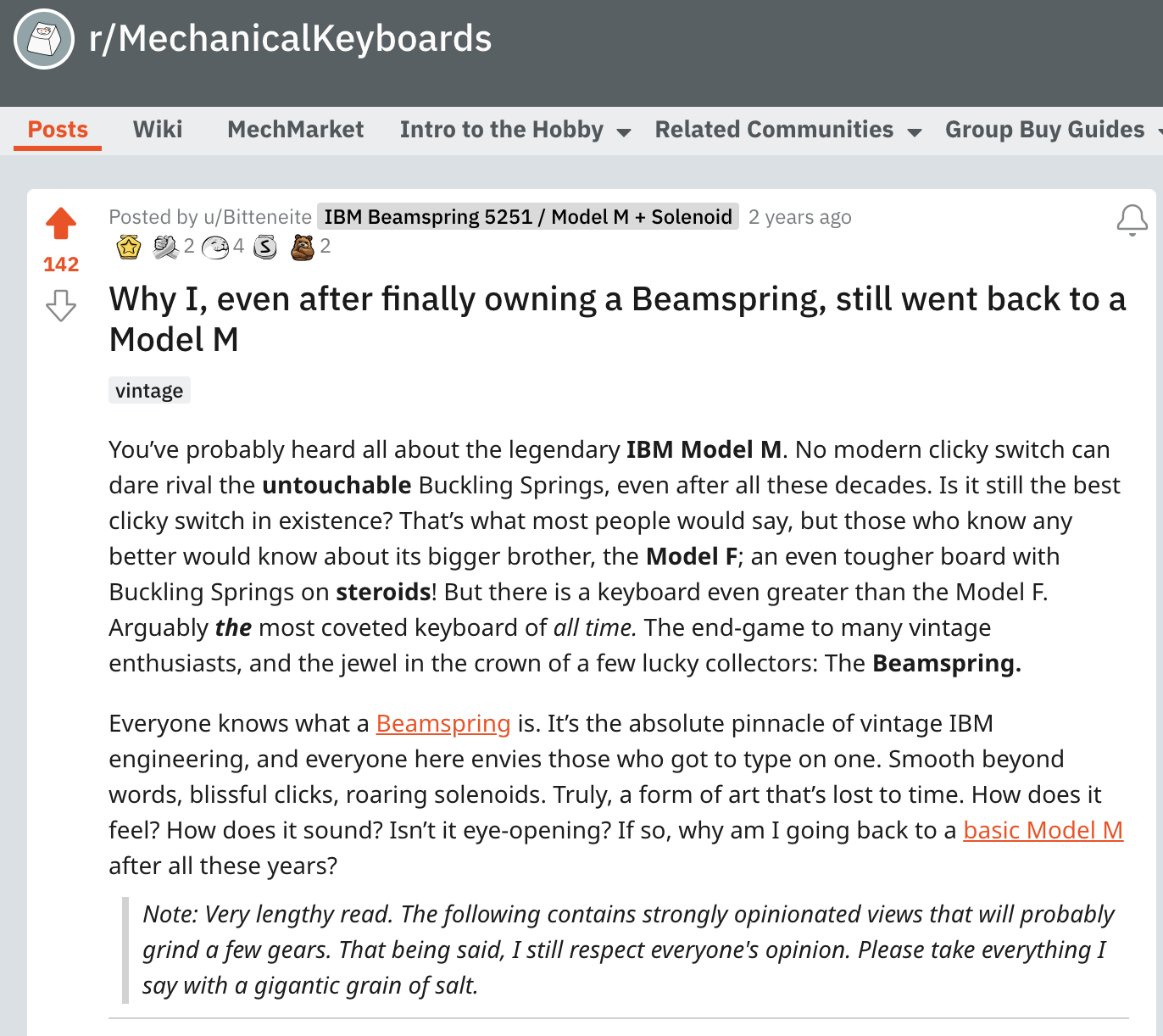 It was a hot sunny day after school. I came back home ready to do whatever homework I had, but my mind went blank as I saw a long heavy box inside the kitchen. It was a generic box, no labels describing what’s inside, but by the shape of it, I knew exactly what it was.

I couldn’t have been any more impatient. I instantly cut open the tapes and unveiled the bubblewrap to what seemed like the heaviest keyboard I’ve picked up, and I was in awe. There was just something about the dense construction and hefty weighting that displayed pure quality. I thought my Razer Blackwidow was premium, but not anymore. The build is in a class of its own, and I was already off to a sweet upgrade!

Why I Still Use a 34-Year-Old IBM Model M Keyboard by Benj Edwards (Howtogeek.com) 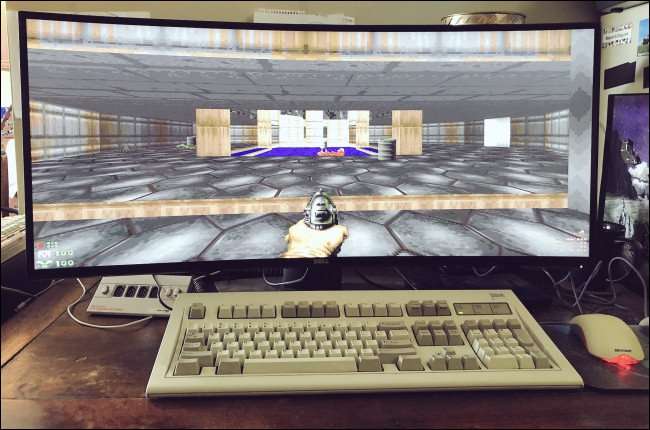 In a world where rapidly changing technology feels increasingly disposable, one thing remains constant in my computer setup: my 34-year-old IBM 101-key Enhanced Keyboard, commonly known as the Model M. Here’s why I’ll never give up its clicky keys and ideal layout.

In 1986, the IBM Enhanced Keyboard cost $295, which is the equivalent of about $695 today. That’s some serious dough—but you did get a serious keyboard.

It Sounds and Feels Satisfying
If you’ve ever used an electric typewriter, you’ll understand the tactile and auditory feedback of the Model M. Whenever you pressed a key on an IBM Selectric, you heard a thunk as the type ball hit the paper. The momentum of the fast mechanical movement vibrated the entire machine.

The secret sauce in every Model M keyboard is a mechanism called the buckling spring actuator. Each key compresses a tiny spring until it suddenly snaps against the side of a cylinder, producing a “click” sound. The spring also pushes a tiny pivoting rocker beneath each key that registers the key press on a membrane below.

Thanks to the snappy springs, you always know when you’ve pressed a key. Because of its high quality, you also know the computer registered the key. The same can’t be said for cheap rubber-dome keyboards.

As a result, the Model M is famously noisy. Every key press generates two clicks, so it almost sounds like you’re typing at twice your actual speed. If I ever type while I’m on a phone call, the person on the other end usually goes silent and then says something like, “Holy cow! What was that?!”

TYPE HARD OR GO HOME: IN PRAISE OF THE CLICKY KEYBOARD by Daniel Nester

“I am typing these words on an IBM Model M, a behemoth beast of a keyboard that has a solid steel plate inside. For the past fifteen years, I have refused to type on anything other than a Model M. Made by IBM from 1985 until 1991 (successors made by Lexmark and now Unicomp, while good, are not regarded as classic), it weighs in at six pounds, about as much as six iPads, and connects to a computer with a curly cable that resembles something Jimi Hendrix might have used with his Fender Stratocaster. Its clicks rival any Remington’s.”

“Does a writer’s style depend on the tools he uses?” Arthur Krystal asks in an essay on the early days of the typewriter. Yes and no. Unlike painters or musicians whose tools and instruments are fully integrated into their art, writers just have words on a page. Sometimes, however, I think I have to be a little angry to write. I need to get worked up in some fashion, and take it out on my keyboard. One fan site dedicated to Model M’s has a tagline I love: “Type hard or go home.” William Wordsworth describes good poetry as coming from a “spontaneous overflow of powerful feelings.” I take my overflows out on a keyboard that can also be used as a weapon.

“It’s got a standard layout, it’s easier to work on, cheaper, it’s easier to obtain, longer cord with slightly more modern connectors and it feels 95% as good to type on as a model F.  Don’t forget that whether or not the model M was intended to cut costs internally, this was considered an upgrade by both IBM and consumers at the time.  That’s why they called it the Enhanced keyboard.  It was only available as a higher cost option on XT’s and AT’s initially and it wasn’t available at all on the original PC at the time.  Those buyers were stuck with the original model F — which was considered outdated at the time.”

“If you have not used the Model M or buckling spring switches before, it is hard to describe to you why it makes the typing experience so great. Just give this keyboard a test drive for a couple of days if you have access to one.

If you like it and you want to buy one, you should get one as soon as possible. Being out of production for decades, the cost of purchasing the Model M especially those in good condition will only go up with time.

It is sad that with all the advancements in computing, the one piece of equipment that we use the most to interact with our computers has regressed technologically in the name of costs. We don’t usually expect to be using 30-year-old hardware on a daily productive basis but the IBM Model M keyboard is that exception.

Today, I don’t really care about fancy features like great aesthetics, RGB backlights, media keys and extra USB ports. I just need something that gives me great tactile feedback, be durable, enable me to easily swap keys to fit my Programmer Dvorak layout. The Model M fits my needs perfectly.”

The Greatest Keyboard of All Time.. Reborn (Linus Tech Tips)

“..it was manufactured back in 1987, just one year after I was born. We know this because every model M has a birth certificate on its back.

Why do people like these things so much after all of these years? It comes down to feel, sound, and build quality.

…for pure typists there’s very little on the market, even all these decades later that feels THIS good.” 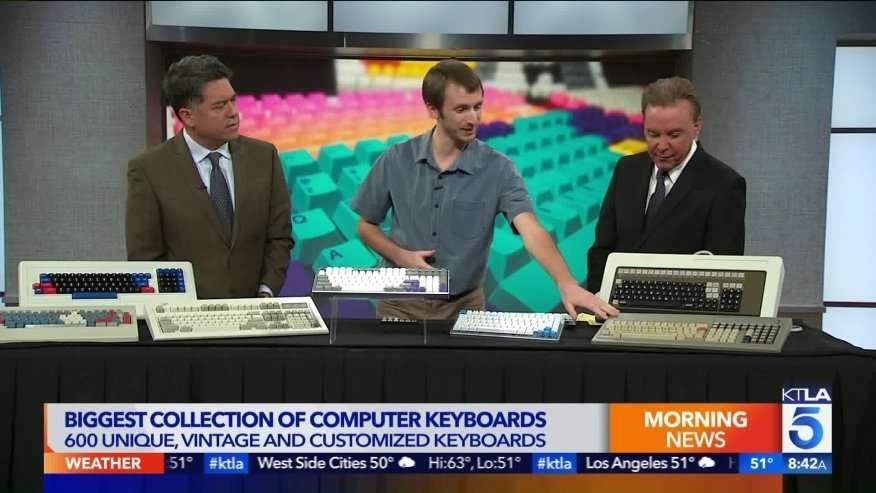 “They are driven by the love and overwhelming appreciation for the design, diversity, and the history of computer keyboards.”

0x001F – IBM Model M Repair by AkBKukU (YouTube)
“Today I’m doing a video on IBM’s venerable keyboard — the model M.  ..and you did read that title right, one of my model M’s is technically, actually broken.   ..and when I say one of, I do mean one of many model M’s.  I’ve found my forever keyboard.”

The Ultimate IBM model M review (buckling springs) by Chyrosran22 (YouTube)
“A testament to IBM’s world-class everything at the time, these extremely high quality keyboards were the standard by which all other keyboards were measured back in the day, and arguably they still should.  The model M is possibly the most well known and most influential keyboard of all time and remains a timeless classic even to this day.  While the computers they came with are either dead or horribly obsolete, the model M has endured and in fact is still relevant keyboard with many that are still in use to this day.”

IBM Model M keyboard ultimate roundup! by Modern Classic (YouTube)
The iconic (and iconically clicky) IBM Model M keyboard has been a fan favorite for three full decades now – an unbelievable run in computer years. I take a look at the major revisions in this video, and I also answer the question of whether it’s still worth buying one in this second age of mechanical keyboards. Is the Model M still the One True Keyboard, and if so, which one should you get?

Markus “Notch” Persson, creator of Minecraft, has a powerful rig with a deceptive appearance. Hidden behind its ancient keyboard and healthy layer of dust, Persson’s computer houses some serious punch. 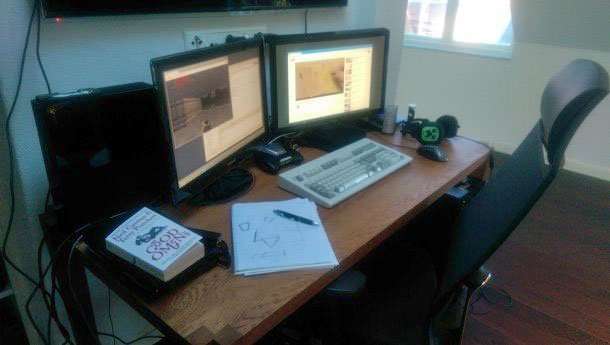 What’s the most interesting/unique part of your setup?
Definitely my original IBM Model M from many, many years ago. It has a PS/2 connector, and weirdly my motherboard does too, so there’s no need for a USB converter. The Model M is basically the best keyboard ever made, with the perfect buckling spring and amazing weight and sweet brownish white color. Definitely designed for people who type a lot, like programmers, authors, and YouTube trolls. Mine is also incredibly dirty and probably a health hazard. I almost broke it the last time I cleaned it, so now I’ll just live with the finger cancer.

On why: “…you have a billion dollars why do you have a keyboard made in 2001”
…”because it doesn’t look like a christmas ornament on acid” – @Notch (twitter feed)

“For many computer users, a keyboard is a device that does not have much to think about. They are closed, typed, finished. There are, however, also users, who spend hours on switches and their different features, via clicks and the quality of keyboard caps. Often, these are not necessarily nerds, but users who have learned to appreciate the advantages of a mechanical keyboard: better tactility, a measurable stroke distance and a direct response increase the typing speed and can reduce the error rate.” 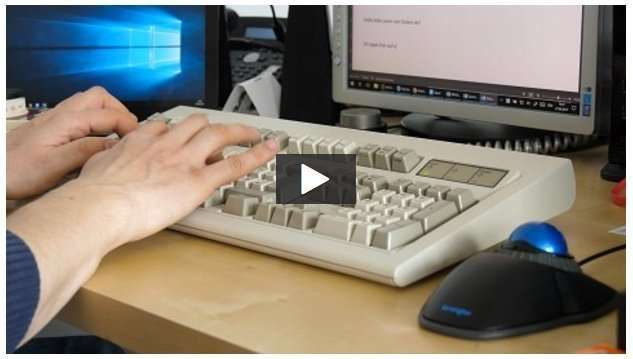 Lazy Game Reviews: Using an IBM model M on a Smartphone
“So if you really want clicky keyboard greatness and you don’t want to bother with Unicomp or getting something else more modern, then here you go….  But you know what, there’s always something about the ORIGINAL” 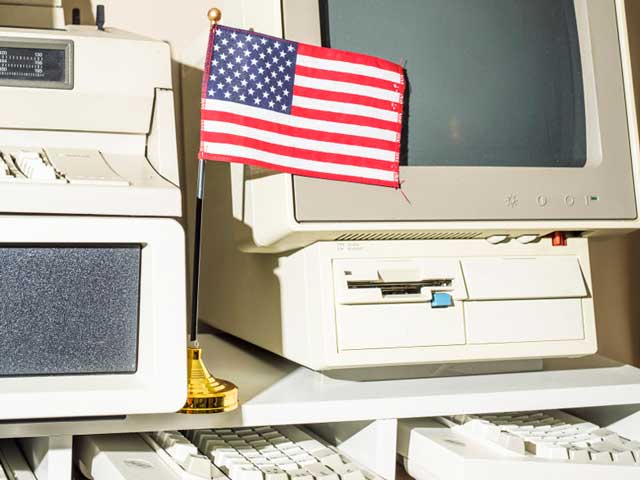 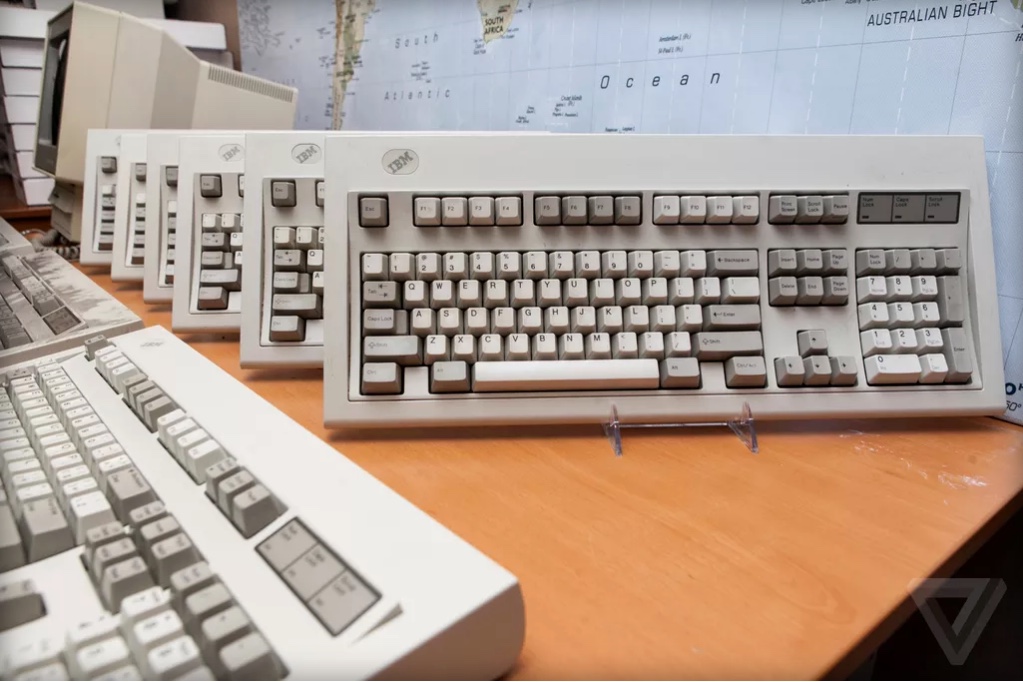 “I did have an IBM model M and nothing can compare.. but I actually gave it away so I probably shouldn’t have done that. …I really had one, it was like an early 90’s and it was ps/2 and it was just awesome in every possible way.” 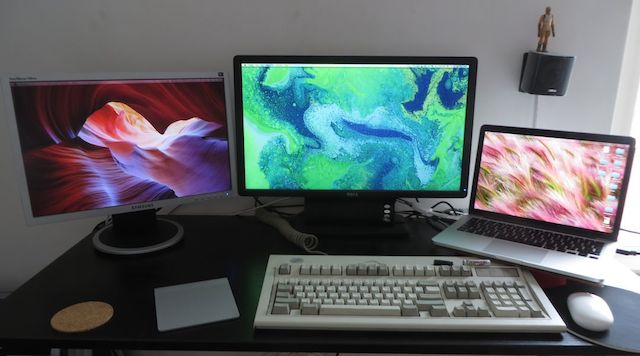 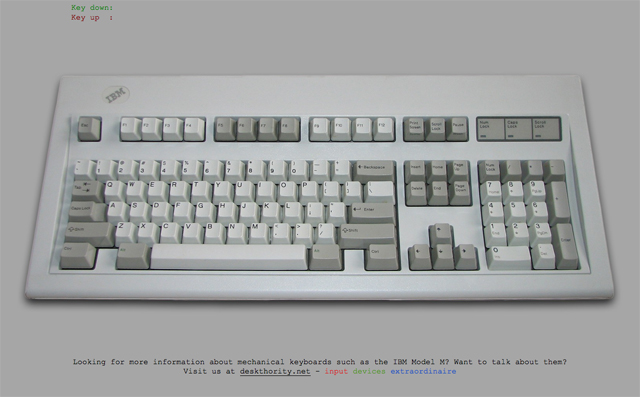 Retro Review: IBM Model M Keyboard The IBM Model M keyboard is perhaps the most legendary keyboard of all time. Companies have been emulating the clicky goodness of the Model M for over 30 years.

Typing on an IBM model M Keyboard This is my very first keyboard with mechanical key switches. I have to say that, coming from a rubber dome keyboard, the sound and feel of the Model M is infinitely better quality. I agree that it greatly resembles a typewriter.

This particular keyboard is the 1993 model, which I purchased at https://www.clickykeyboards.com/

How to Clean an IBM model M keyboard